Are We Gradually Drifting....? 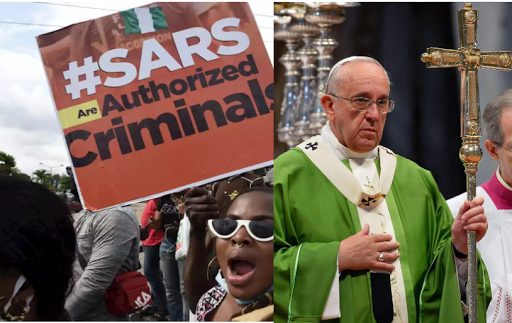 Attacks would come after people must have read this but I strongly want to say that been a catholic doesn’t influence this write-up instead it aids it the more. I pride myself to knowing the intricacies of English language having taught the subject myself for several years. Also, having studied mass communication I have come to realize that most times assertions ain't what they seem. I for some reason feel very much disappointed at people who sat in the same lecture hall with me studying communication misinterpreting the popes words.

Pope Francis called for ‘same-sex civil unions’ and not ‘legalization of same sex marriage or relationship’ what we should try to understand is what the term civil union entails.

In the legal sense of it A civil union is a non-marriage relationship between two people that is recognized in some states and subsequently may be afforded legal protections in that state. Unlike marriage, civil unions don’t enjoy the same benefits, responsibilities, legal obligations and federal protections as married couples.

Nigeria is currently confronted by not only Boko Haram Insurgency, Fulani herdsmen but the Special Anti Robbery Squad (SARS) amongst others as regards to the ongoing protest. On the 20th of this same month statistics show that 75.7% of the 100% television stations aired the happenings in Nigeria but since the words of the Supreme Pontiff was aired this same 75.5% went down drastically to a mere 16.5%. At this very moment we should be worried about the lives lost. Peoples fathers made fatherless, peoples husbands killed, parents made childish, people who lost boyfriends, girlfriends, sidekicks to mention but a few. But, if you are worried or interested by what Pope Francis said about same-sex civil unions, then here are a couple points to keep in mind:

These are trying times and we should strive to discern between the truth and what stares us on the face. I am a lover of series and i remember vividly Zeddicuss Zul' Zorander the wizard in Legend of A Seeker when he gave Richard Cypher his first lesson 'people may believe in something because they want it to be true or because they fear it might be true' Which category do you currently find yourself.

Finally, If we all read the New Testament as much as we obsessed about the latest papal headline we would all be further along in the pursuit of holiness. Jesus is the Lord and the gates of hell cannot prevail against his Church. It is our vocation to focus on him and be faithful in our daily life. I leave you with the Popes own assertion ‘who are my to judge’