The Book of Exodus 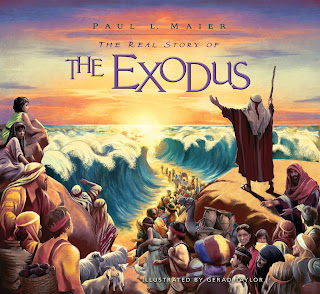 The Israelites prospered in Egypt, but a new king arose and forced them into hard labour. He commanded that their baby boys be killed.
Pharaoh's daughter found a Hebrew baby by the river. She named him Moses. As Moses grew up, seeing the suffering of his people, he tried to save them by himself, in one case he even killed an Egyptian but it didn't work out, instead he was hunted as he flew to Midian.
Moses saw a burning bush. God told him to lead the Israelites out of Egypt. Moses asked God his name and God said, "I am who I am."
The LORD gave Moses signs so that the people would listen. Moses was afraid, so the LORD sent his brother Aaron to speak for him.
Moses and Aaron told Pharaoh to let the Israelites go into the desert to worship. Pharaoh refused and increased their workload instead.
The LORD told Moses that he would lead the Israelites out of Egypt to the promised land. Aaron and Moses were from the tribe of Levi.
Moses and Aaron went to Pharaoh again but he wouldn't listen, the LORD turned the Nile to blood, but Pharaoh wouldn't listen.
The LORD sent a plague of frogs on Egypt. Pharaoh begged for relief but then hardened his heart. The LORD sent gnats and then flies.
The LORD sent a plague on the livestock of Egypt, then boils and then hail. Pharaoh begged for relief but then his heart was hardened.
The LORD sent a plague of locusts. Pharaoh begged for relief but then his heart was hardened. The LORD sent darkness for three days.
The LORD said that he would send one more plague, and then Pharaoh would let the Israelites go: all the firstborn Egyptians would die.
The LORD told the Israelites to take Passover. That night all the firstborn Egyptians were killed. Pharaoh told the Israelites to go.
The LORD told the Israelites to consecrate their firstborns to him. He guided them as a pillar of cloud by day and of fire by night.
Pharaoh's army caught the Israelites by the sea. The LORD parted the waters and the Israelites crossed. The Egyptian army was drowned.
The Israelites sang: "I will sing to the LORD, for he has triumphed; horse and rider he has thrown into the sea." They camped at Elim.
The Israelites grumbled to Moses that they had no food, so each day the LORD provided quails and manna. They rested on the sabbath.
The LORD told Moses to strike a rock to provide water. Amalek attacked Israel, but as Moses held up his arms Joshua's army prevailed.
Moses' father-in-law Jethro came and offered sacrifices to God. He suggested that Moses appoint leaders to help him judge the people.
The Israelites camped near the mountain in Sinai. The LORD spoke to Moses on the mountain and made his covenant with Israel.
I am the LORD your God. Honour the LORD above everything. Keep the Sabbath. Honour your parents. Don't do wrong to your neighbours.
If you buy a Hebrew slave he shall go free in the seventh year. Whoever kills shall be put to death. Whoever injures shall compensate.
Whoever steals shall make restitution. If a man sleeps with a virgin he shall marry her. You shall not oppress strangers or the poor.
You shall not pervert justice. Each year you shall hold feasts. My angel will lead you and I will drive your enemies from the land.
The people said, "All that the LORD has spoken we will do", and they offered sacrifices. The LORD told Moses to stay on the mountain.
Tell the Israelites to make a sanctuary for me. Make an ark with a mercy seat and two cherubim. Make a table. Then make a lampstand.
Make a tabernacle of fine linen. Make curtains of goats' hair to cover the tabernacle. Make boards of acacia wood and a linen veil.
Make an altar of acacia wood with bronze utensils. Make a court for the tabernacle of fine linen hangings and bronze pillars.
Set apart Aaron and his sons to minister as priests. Make a breastplate, an ephod, a robe, a tunic, a turban and a sash for them.
Sacrifice a young bull and two rams to consecrate Aaron and his sons. Make daily sacrifices on the altar and I will dwell with Israel.
Make an altar for burning incense. The Israelites shall each give half a shekel. Make a bronze laver. Make anointing oil and incense.
I have filled Bezalel with the Spirit of God, with skill to make everything I have commanded. The seventh day is a Sabbath of rest.
While Moses was away the people worshipped a golden calf. Moses pleaded with the LORD for them, but then had three thousand killed.
Moses set up a tent of meeting. He said to the LORD, "Don't send us from here without your presence." The LORD passed near to Moses.
Moses made new tablets for the law. The LORD spoke to him and made a covenant with Israel. When Moses returned his face was shining.
Moses told the Israelites to keep the Sabbath. He called for craftsmen to make the tabernacle. The people gave gifts for the work.
The people gave more than enough. The craftsmen made the curtains. Bezalel made the curtains, the boards, the veil and the pillars.
Bezalel made the ark with its cherubim, the table, the lampstand and the incense altar. He made the anointing oil and the incense.
Bezalel made the altar of burnt offering, the laver and the court. Ithamar kept an inventory of the gold, silver and bronze used.
They made the ephod, breastplate, tunics, turban and sash for Aaron. Moses saw that it had all been made as the LORD had commanded.
Moses set up the tabernacle and brought the ark into it, as the LORD had commanded. Then the glory of the LORD filled the tabernacle.