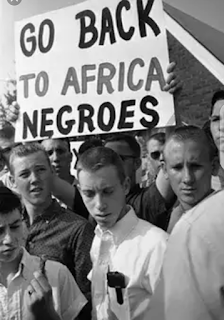 One thing that keeps me puzzled despite scoring an 'A' while I wrote Economics in WAEC is that alot of questions remained unanswered by my tutors: "Why is it that 5000 units of African currency is worth 1 unit of European currency yet we (Africans) are the ones with the actual gold, oil and diamond reserves?" It's very evident that the aid is infact not coming from the west to Africa but from Africa to the western world. The western world depends on Africa in every possible way. So how does the rest ensure that the free aids keeps coming? By systematically destabilizing the wealthiest African nation's, leaving the entire world under the impression that Africa is poor and dying and merely surviving on the mercy of the west. I say well-done to UNICEF, Red cross, Life Said and all other organizations that continuously run multi-million dollar advertisement campaigns depicting charity porn, to sustain that "poor" image of Africa, globally. While one hand gives under the flashing lights of cameras, the other takes in the shadows.
From the beginning, Europe assumed the power to make decisions within the international trading system. An excellent illustration of that is the fact that the so-called international law which governed the conduct of nations on the high seas was nothing else but European law. Africans did not participate in its making, and in many instances, African people were simply the victims, for the law recognized them only as transportable merchandise. If the African slave was thrown overboard at sea, the only legal problem that arose was whether or not the slave ship could claim compensation from the insurers! Above all, European decision-making power was exercised in selecting what Africa should export – in accordance with European needs.
We all know the dollar rate and the euro is merely charged with German intellect and technology. But, how can one expec donations from nation's that have so little? It's super sweet of the westerns to come with their colored paper in exchange for our oil, timber, cocoa, diamond and gold. The perception is that a healthy and striving Africa would not disperse it's resources as freely and cheaply, which is logical. Of course. It would instead sell it's resources at world market prices which is still believe will inturn destablizie and weaken western economies. 5 years whilst still in the tertiary institution, the IMF reported that six out of ten of the world's fastest growing economies are in Africa measured by their GDP growth. The French treasury for example is receiving about 500 billion dollars, year in, year out.
Have you ever wondered how things work in nature. One would assume that in evolution the fittest survives. However in nature, species that is overhunting, overexploiting the resources they depend on as nourishment, natural selection would sooner or later take the predator out, because it offsets the balance. Wonderful things happens when creatives meet with mutual respect. The absence of donation produces quality in a self sufficient manner. I believe charity merely creates inferiority and dependency. It's not about charity it's about "sharity". I invite you today to change your perspective. Own your visions of a brighter world. Never see lack, see abundance always, everywhere and watch the universe conspire. Dont focus on problems but on the solution.
Remember our perception of any given situation is the only thing that determines the outcome. I still remain
Dominic C.C and I am one of you
Labels: Dominic Christian