Should Husband's Wash Their Wives Panties 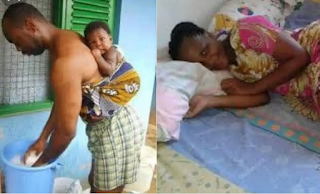 While still in the tertiary Institution, I admired and still admire one of my astute lecturers – Mrs. Adah Anyahuru Kudirat, because of her virtually all the girls in my class turned to Feminists.
In the words of popular Award winning Nigerian writer – Chimamanda Ngozi Adiche Feminism in an ideal sense simply means being who you are; being the woman that you are, without fears of judgement from folks. She asserts “and then we do a much greater disservice to girls, because we raise them to cater to the fragile egos of males. We teach girls to shrink themselves, to make themselves smaller. We say to girls: you can have ambition, but not too much. You should aim to be successful but not too successful, otherwise you will threaten the man. If you are the breadwinner in your relationship with a man, pretend that you are not, especially in public, otherwise you will emasculate him”

I therefore believe that in other words, it's all about fighting for what you want not waiting for others to give you what you need. It may interest us to know the reason behind FEMINISM evolved because women were confined to the domestic sphere, while public life was reserved for men. Women were also denied the right to own property, study etc and all these denials were contrary to Natural justice and the doctrine of Equity. In some jurisdictions husbands had the right to sell their wives, women could neither vote nor hold elective office, and in some jurisdictions married women could not exercise control over their own children without the permission of their husbands etc. These restrictions on women prompted the need for women’s right and then the FEMINISM movement which took place as far back as the 60s by Mrs. Ramson Kuti, popular fuji singer Felas mum. Thank God those barbaric codes are not longer seeing the light of day.
It is not a war against men neither does it entail being a sexist. However, it is right to say that most commentators (mostly men) claim FEMINISTS are braless lesbians who want to destroy the family. Well, it behooves me to stand up and say "NO" because that's a wrong perception of the term feminism. But then, it is so appalling that instead of the ideal reason for feminism women both old and young choose to be ignorant to morals, ethics, culture, behaviours etc.

The reason for FEMINISM is to curb the restrictions and harsh treatment meted out on women; to bring about equality of gender not to be a sexist or to be at war or competition with a man. Most women out of ignorance tend to see FEMINISM as a socialist, anti-family political movement that encourages women to leave their husbands, challenge their husbands, do away with morals and values, fight every single opinion a man has to offer. Sequel to this woman who are bread winners make their husband wash their panties even though the scripture compels them to be “submissive to your husband as you are to the lord…” Ephs. 5:22

On a close look, I have a friend who is a feminist like myself but our views do not match because to her, she can't cook for a man including her hubby and she would always dispute his opinion because she feels she is a so called FEMINIST. That is just been so blind and ignorant to the ideal reason behind FEMINISM MOVEMENT and I know so many women out there with same view as hers. It’s high time then to understand the reason behind feminism and put an end to irrelevant outrageous meanings. Take a curious look at our modern so called celebrity feminists majority ended up eating their vomits, I beg not to mention names. It then leaves a big question unanswered SHOULD HUSBANDS WASH THEIR WIVES PANTIES because their wives are feminists.