SARS: A Thorn In The Flesh Of Nigerian Youths 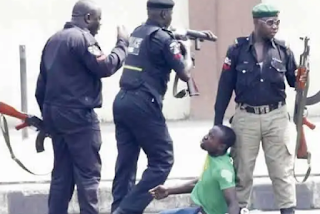 Nigerian youths continue to suffer under police brutality and extortion. The Nigerian Police was ranked the worst in Africa in 2017. This is not to insight violence or intended to be hate speech but like I would always say it "call a spade a spade and not a Garden fork"

My dad - God rest his soul was an Inspector who died in active service in 2003 and till date, gratuities is yet to be paid. So I believe I understand firsthand the implications of what I am saying. When rated worst in Africa, reforms were promised, but the Nigerian Police has not changed much about its image and interaction with the public.

My friend (name withheld) an aspiring Computer Science Student in Imo State University Owerri, located in the Eastern Part of Nigeria, was harassed and assaulted by a unit of the Nigerian Police Force known as the Special Anti-Robbery Squad (SARS) because he carried a laptop. He was immediately accused of being a fraudster or what’s popularly known in Nigeria as G-Boy. When I went to see him several days later he told me of his experience with the rogue police unit who had guns pointed at his legs. The policemen then demanded for $2,760 which is approximately N1million.

Shocked at the demand the policemen made he was asked to then pay half of the initial amount they had requested for. He was slapped by six policemen who had by this time dragged him to the police station where they were to extort him. Despite presenting an I.D showing he was a student, the policeman refused listening to him. They threatened to instead take him to Kiri Kiri, a notorious prison in Nigeria. His story is just one of the many stories that Nigerian youths have to tell about their experience with SARS.

Beyond carrying a laptop, wearing dreadlocks; having a good car, an iPhone amongst several others are some of the many things that Nigerian youths complain are a source of harassment from the Nigerian police. With Nigerian youths doing more remote jobs and going into the tech industry, they are bound to face tough times from an uneducated and uncouth police unit which should have been banned. With no doubt the scripture compels us to respect constituted authority Romans 13:1-3 "Everyone must submit to governing authorities...so anyone who rebels against authority is rebelling against what God has instituted, and they will be punished" This doesn't justify police brutality.

“Truly, truly, I say to you, he who does not enter the sheepfold by the door but climbs in by another way, that man is a thief and a robber. But he who enters by the door is the shepherd of the sheep. To him the gatekeeper opens. The sheep hear his voice, and he calls his own sheep by name and leads them out." John 10:1. Meaning that when you perceive one is out of place because of the persons dressing, hair do or exotic lifestyle "enter the sheepfold by the door" and properly convict such individual other than resorting to "climb in by another way" the Bible calls you A THIEF.

The question that is left unanswered then is SHOULD THEY BE BANNED....???
Dominic C.C (ISMN)