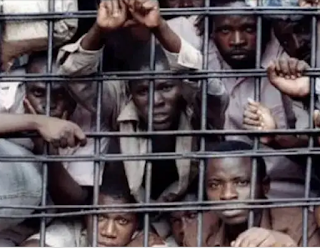 My post on Will Racism Ever Stop, brought lotsof controversial comments especially on facebook. I was asked to stop, take it down and stop writing that. How I laughed. Racism is just a tip of the many difficulties we face as a people. Did you know that the population of America is a little above 328.2 million. In this census Blacks in America make a total of 42% of the population and yet over 13% are in prisosn. How we treat a person during the darkest point of their life's is the benchmark of humanity.

Putting individuals convicted of crimes, especially violent crimes, in prison is thought to make the rest of us safer. But how much safety does all this imprisonment actually buy us? The answer is very little, especially in the long-term.

There are good reasons to think prisons might prevent crime. The experience of imprisonment could deter someone from committing crimes to avoid prison in the future. Prison might provide opportunities for rehabilitation, such as drug and alcohol treatment, education, or counseling. And, at the very least, someone who is in prison cannot commit a crime in the community, an effect criminologists call “incapacitation.”

Yet, there are also good reasons to believe that prisons might actually increase crime. The harsh prison environment could increase mental health problems, make people more prone to aggression, or make them cynical and distrustful of the legal system. Prisons could isolate prisoners from friends and family who might help them find jobs eventually. Or prisoners may learn from other prisoners how to be better criminals.

When a person is thorn from their home and put in a cage it's not just the prisoner that suffers; their entire family is institutionalized. The current Nigerian system disproportionately throws them off balance...it is a system that is unjust and which has profound constitutional implications...visit our Nigerian prisons today and you will understand what I am talking about. If you have never been held captive of any sort you wouldn't understand the intricacies behind this...I do not mean that they should be let free but courtsey, regard should be given them.

I once joined a priest to celebrate his birthday with some prisoners or what the current Nigeria government will call Rehabilitation center. I couldn't help but weep at the mere sight of these ones. I had a chat with one of them who has stayed there for a little above 19 years for a crime any of our politician children wouldn't spend 5 minutes behind the Police counter for. "Remember those who are in prison, as though in prison with them, and those who are mistreated, since you also are in the same body" Heb. 13:3

The Big Question Now is DO THEY DESERVE A SECOND CHANCE????